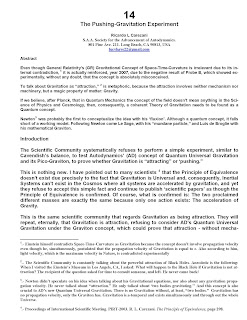 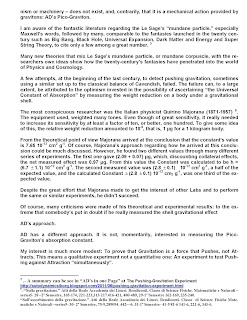 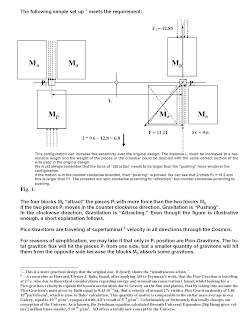 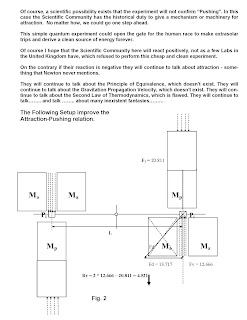 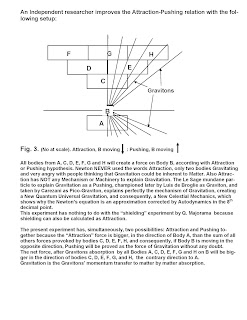 Posted by Unknown at 3:03 PM No comments:

Why is Pauli Wrong?

Why is Pauuli Wrong?
The TOTAL MASS LOST insude the decayng Bi to Po, in units is equal to

This  TOTAL ENERGY putside the Po needto be equal to the Total
Energy availablee of 1.16) MeV since the Energy Conservacion is
an Universal Law.

Total Energy = mo + KEe
1.16 MeV = 0.511 MeV + KEe Me
KEe MeV = 1.16 MeV -  0.511 MeV
KEe Me =  0.649 MeV
This is the maximum possible vulue provided by the available Mass
There is NOT ANY Energy LOST
It is NOT needed neither any Ghost Particle nor any penetrating Radiation
To conserve Energy. In simple words: NO NEUTRINO.
Where come from the Pauli's LOST Energy?
He applied the SR's KE equation which yield, by pure coincidence: KEe =
-. 1.16 MeV.
This is IMPOSSIBLE because now Total Energy is

Yhere is NOT Energy Concervation: SR is Wrong.


The whole  citcle is closed

Ot is very well lnoen that the Bi Decaying to Po is due to the the Neutron
Decaying to a Proton-Electron. The Proton stays inside the Nucleud and
the Electron flying outside.

This Kinetic Energy is distribuited between the Proton which stay
inside the Nucleus , and the Electron flying outside the Element. As
the electron Rnergy os equal to 0.849 MeV, the difference from 0.782
Is taken by the Proton:

The whole process is perfectly closed and in prrfectt equlity
because

Equall to the Total Energy available.

Neither Any Neutrino nor penetration Radiation is neede .

Pauli is wrong because Einsteiniswrong!

And also temember: All values are takind ffrom a prosaicc   table of Elements!!!

Posted by Unknown at 1:13 PM No comments:

Published in Science Magazine from the New York Times Editor 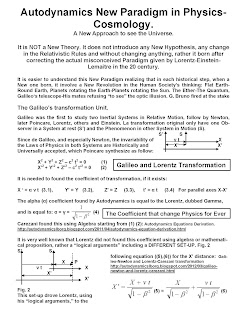 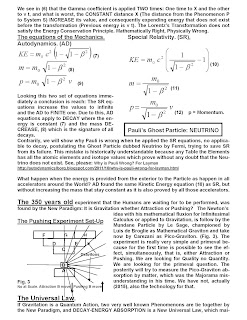 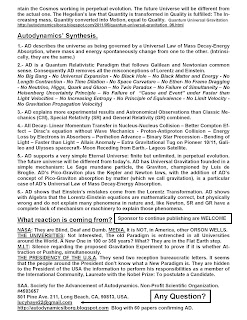 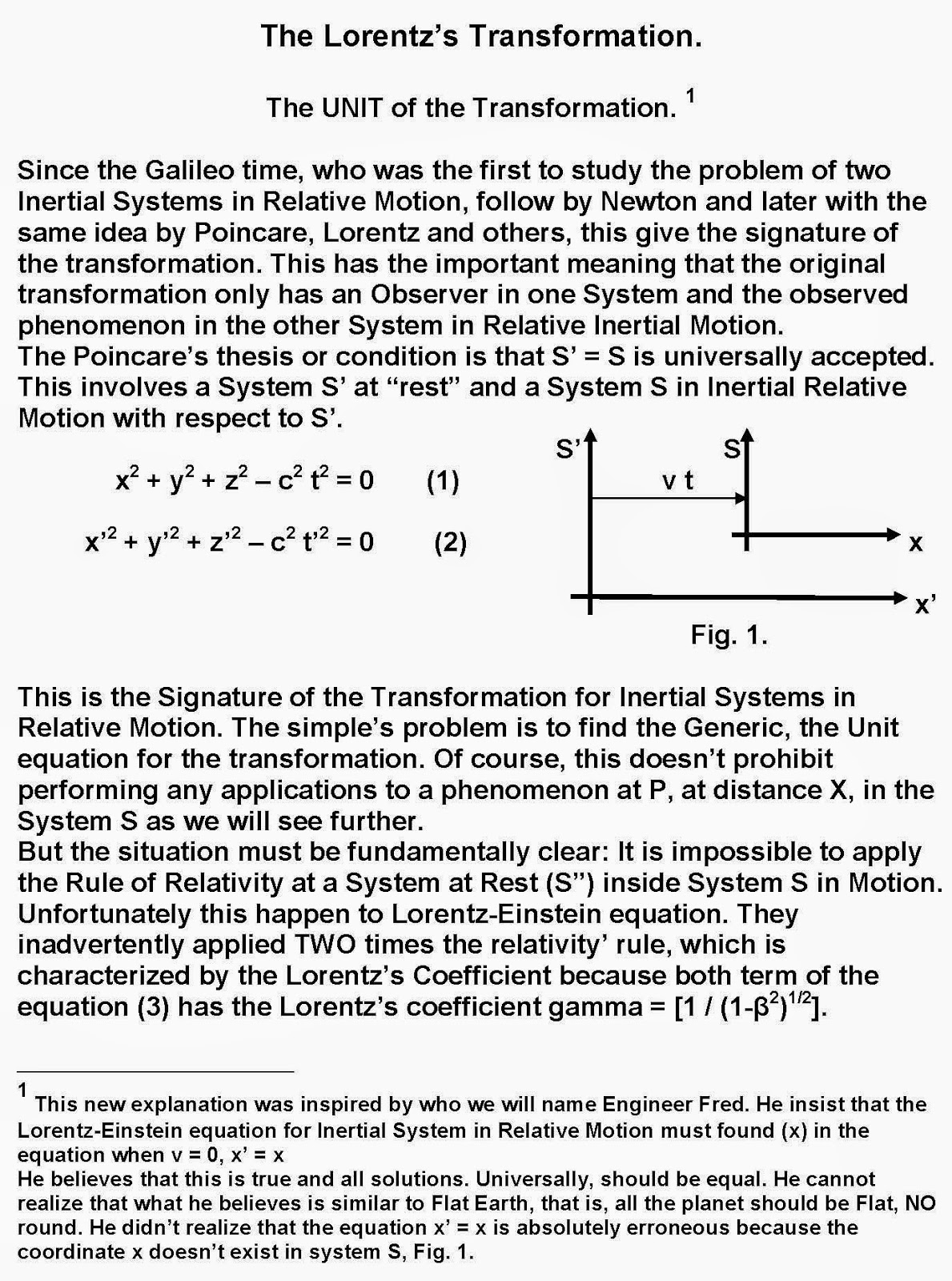 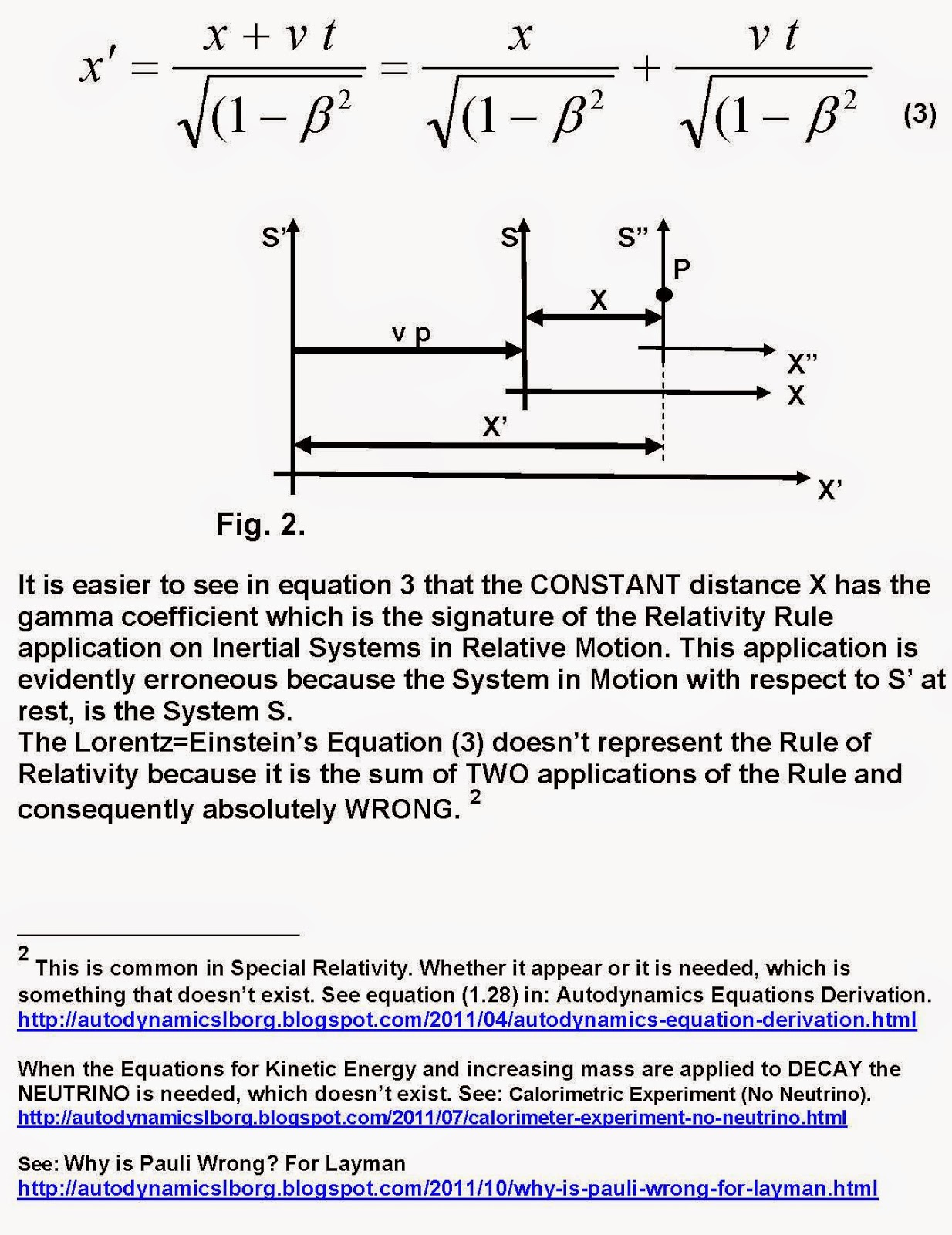 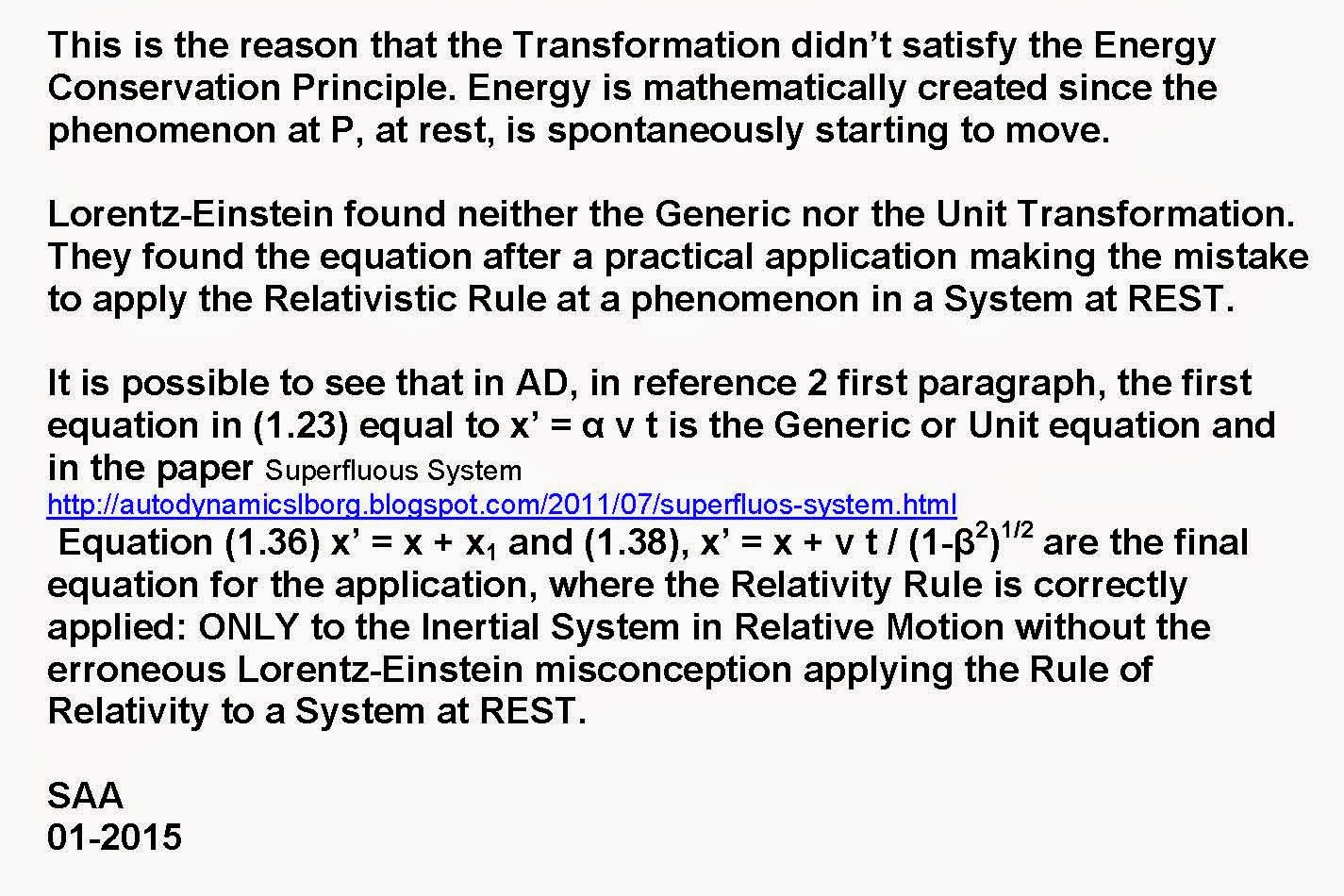 Posted by Unknown at 4:39 PM No comments:

Teaching Autodynamics Award Rise to $ 65,000.00
NEW RULE
Pioneer 11/10 and the Solar
Even though the auto-called *scientific Community* accept, in a big proportion, that the Pioneer anomaly is related to its radioactive engine, there is another Satellite, the Ulysses orbiting the Sun, which show that the engine approach is absolutely erroneous. Ulysses has a positive acceleration when it is approaching the Sun and a negative one when it is moving away from it.


NASA, using the Assist Dynamics, provided de force to send the Pioneer outside the Solar System but it is the Sun who has the traveling absolute control after the NASA force stopped. Really Nature, as a whole, is what has the total control because the Satellite’s measured velocity depends on the equation used to find it. NASA is erroneously using the old static Celestial Mechanics and the so called anomaly doesn’t exist because that Celestial Mechanics fail to calculate the real effect provoked by Nature.


The Autodynamics Celestial Mechanics provide a bigger value than the Newtonian one.


To see how the mass increment is get see:


Autodynamics is supported by many results get from many different applications


The increasing Gravitation in Eclipse Time.


The increasing Galaxies size looking at billions year far away.


Gravitation Non-Propagation velocity. The Graviton has velocity;   Gravitation has NOT. It is actually present in the whole Universe.


It is to point it out here that the Autodynamics’ author didn’t invent neither any theory nor any particular hypothesis to explain each phenomenon.


It is a simple mechanism after elevating to a Universal Law two concepts very well known: Mass Decay-Energy Absorption.


We made a simple program to calculate the Solar mass correctly using the Pioneer 10-11 “real position and fly’s time”. (We are not totally sure of the data because NASA never answered any question).


From the program  output we include only three values for acceleration proving the given values and the actual Solar mass, which, of course doesn’t give any ***anomaly.*** The Pioneer position is given by Nature and the anomaly is introduce by ourselves, due to the fail of Newton Static equation corrected by Autodynamics , the New Paradigm by Carezani, as a dynamics one with his Quantum Universal Gravitation and consequently with his new Celestial Mechanics.

Einstein's Photo-Electric Effec and its Consequence,

We received many times the CLASSIC Question:


What is the Experiment proving right Einstein’s Special Relativity?


To tell the plain TRUTH there is NOT ANY experiment proving Einstein right.


The only experiment performed by Einstein, the Photo-Electric experiment, which gave him the Nobel Prize, proved Special Relativity Wrong!


The only experiment that confirm Einstein right is his Photoelectric experiment (P.E.E.), but unfortunately for him, CONTRADICT his Especial Relativity.


P.E.E.: A photon strike an Electron inside a material medium, ejecting it.


This yielded a surprisingly reality: His Photo-Electric-Effect CONTRADICT his Special Relativity because on it he support that the Photon has not mass as required condition to travel at c to satisfies his equations. BUT the Electron has MOMENTUM and the Momentum Conservation Law is not conserved between the Electron and Photon.


Einstein didn’t pronounce a word on this failure and the “Scientific Community” made the Ostrich classical action introducing his head in the sand.


This is confirmed by the ’s Effect experiment which is also explained poorly by the Special Relativity that cannot calculate its values correctly.


The whole TRUTH is that neither SR nor General relativity (GR) explains any natural experimental phenomenon.

GR cannot explain neither from where is get the Force to Increase the Planet Mercury increasing velocity, which is call Perihelion Advance, nor the Lageos Satellites Precession. In the Mercury case the empirical equation give a value, as also can do with different value, but both without any mechanism or machinery to explain it. In the Lageos case his space dragging proved to be another fantasy confirmed by the Probe B with a total failure to measure any value.
Posted by Unknown at 12:42 PM No comments:

Comparing the Actual Galaxies sizes with the Old one.


Comparing the Actual Galaxies sizes with the Old one.


Autodynamics New Paradigm in Physics-Cosmology continue accumulating explanations in many new discoveries in this matter, which cannot be explained by the Classic Mechanics, and what is worst, neither by Special and General Relativity.


The Hubble Picture Published by NASA:


NASA published a few weeks ago a picture with the actual Galaxies size and the distant one around 11.1 bly. The Picture show that the far away Galaxies were smaller than the actual one, being the old one around 1/5 to   ½ smaller, which cannot be explained neither  Cosmologically by the Actual Paradigm including General Relativity, and , of course, Newton.

The explanation is very simple when we have the correct Celestial Mechanics given by the Quantum Universal Gravitation, where the Celestial bodies increase their Mass by the Gravitational Quantum (Graviton) absorption by matter, which provide the force that provoke  the Planet Perihelion Advance, the Lageos Satellites precession, the Spacecraft slowdown as the Pioneers 10/12. etc,, the increasing micro acceleration in the Assist action to increase the spacecrafts’ velocities, the increasing Gravity during Eclipse time, etc, under the fundamental Law of Mass Decay-Energy Absorption, which maintain the Universe in Perpetual Motion and Evolution.


A-20- Autodynamics Gravitation Applied to Lageos-Mercury.


Regarding the Galaxies’ size related to the time that light travel to reach us the explanation is easier since the average calculated using the Celestial Mechanics through known values as the Mercury Perihelion Advance and Lageos Satellite Precession is 7.594 by to double any body mass in the Cosmos.